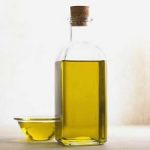 Some things just don’t get along well with each other. Take oil and water as an example, you can mix them together and shake as hard as you like but they’ll never become friends…..or will they? Take this fun experiment a step further and find out how bringing oil and water together can help you do your dishes.

PROCESS:
Add a few drops of food colouring to the water.

Screw the lid on tight and shake the bottle as hard as you can.

Put the bottle back down and have a look, it may have seemed as though the liquids were mixing together but the oil will float back to the top.

EXPLANATION?
While water often mixes with other liquids to form solutions, oil and water does not. Water molecules are strongly attracted to each other, this is the same for oil, because they are more attracted to their own molecules they just don’t mix together. They separate and the oil floats above the water because it has a lower density.

If you really think oil and water belong together then try adding some dish washing liquid or detergent. Detergent is attracted to both water and oil helping them all join together and form something called an emulsion. This is extra handy when washing those greasy dishes, the detergent takes the oil and grime off the plates and into the water, yay!